There were a number of Catholic families among the farmers and dairymen who had settled in Maspeth some 200 years ago, but it wasn’t until 1854, when St, Mary’s was established in neighboring Winfield, that they were able to attend Mass regularly. Fifteen years later, St. Mary’s pastor, Father Ignatius Zeller, visited Maspeth weekly to celebrate Sunday Mass in a local storefront. The community was growing rapidly – and its Catholic population along with it. In 1872, Bishop Loughlin dedicated a new church under the patronage of St. Stanislaus Koskta, on Perry Avenue, and began serving the five hundred Catholic families in Maspeth and nearby communities.

For six months the new church was a mission of St. Mary’s, but in June 1872 reverend John McElhenny became the first pastor. He was succeeded by Fathers Molloy, Baxter and Malone, and in 1882 Father Pauletigi began his pastorate which would last for sixteen years. Father Murray was pastor for two years, and then at the beginning of the Twentieth Century Rev. Joseph A, Bennet came to St. Stanislaus to being his quarter century leadership. The community and the parish were growing in light manufacturing and other businesses began in the area and homes wer being built by people who worked “in the city” and became what we now call “commuters.” New immigrants from various parts of Europe were also finding their way to Maspeth.

By the time World War I ended, Fr. Bennett knew he needed to build a larger church and began plans for a new church and rectory, with a school and convent to follow in the future. The land, on Clermont (61st Street and Maspeth Avenues, was purchased in 1920. The site was the former Quaker cemetery dating back to the earliest settlers. Maspeth’s Catholics and non-Catholics alike participated in the fundraising campaign – chiefly the “selling” of bricks at ten cents each – and the cornerstone was laid in 1923.

The beautiful combination church and rectory was dedicated in 1925 by the Most Reverend Thomas E. Molloy, Bishop of Brooklyn. The church was not fully completed when Fr. Bennett died in 1926. The impressive marble altar from Italy was donated in his memory by his family; the lovely stained glass windows were donated by parishioners and church societies In Fr. Bennett’s memory, the people of St Saviour’s Episcopal Church, whose pastor, Fr, Frederick S. Griffin, was a close friend of Fr. Bennett’s , erected the original Stature of the Blessed Mother in the rectory yard, facing toward St. Savior’s. Fr. Joseph A. Bennett was succeeded by his brother, Fr. James J. Bennett. The Parish, which had long ago begun to be called “Fr. Bennett’s Church,” would now continue to be know by that name for many years to come.

Fr. James Bennett came to Maspeth with a background of building and expanding parishes, both spiritually and physically. He completed the building of St. Stanislaus Church begun by his brother, remodeled the Perry Avenue building as a parish hall, and began the parish school. Despite the Depression, the school was fully operational by February 1934, with the first floor used as the school, and the upper floor classrooms serving as the convent for the teaching Sister of St. Joseph until the convent was built in 1938.

The Sisters build the school scholastically, giving thousands of St. Stan’s children through the years a solid foundation of the four R’s – and so much more. Even in recent years, with the dramatic decrease in the number of teaching sisters, St. Stanislaus Kostka School has been fortunate to have members of the congregation serving as Principals.

The early 1940’s brought World War II and the Honor Roll in the back of the church bore witness to the large number of St. Stan’s parishioners who went off to war. Gold stars were placed after the names of the men who were killed in action, and Masses were offered for them as well as in prayer for the safe return of all the others. On the homefront, the men and women of the parish were active in the war effort, and when peace returned they continued to become increasingly more involved in community activities – a service that continues to the present time.

In 1950 Fr. James Bennett became the only Pastor of St. Stan’s to be elevated to the rank of Monsignor. Sadly Msgr. Bennett passed away shorts afterwards, and the half-century of the priest-brothers’ pastorates ended. They served under the reigns of four Popes, building a strong foundation and guiding the development and growth of the parish into a solid community of faith.

Reverend Andrew Heaney was named pastor in 1951, and continued the tradition of growth established by his predecessors. During Father Heaney’s pastorate the school auditorium was build and the school yard was enlarged by the purchase of property on Maspeth Avenue. Father Heaney was pastor during the momentous years of the Second Vatical Council, and was personally affected by one of its reforms, namely, the retirement of pastors at age 75. Father Heaney remained at St. Stan’s as Pastor Emeritus until his death in 1971.

Father Edwin Brosnahan succeeded Father Heaney as pastor in 1967. Although he was pastor for only one year, Fr. Broshanah accomplished extensive renovations on the school building and began the implementation of the liturgical reforms of Vatican II until his untimely death in 1968. Father Joseph Abernathy served as pastor from 1968 to 1971 and passed to his eternal reward after a brief three years at St. Stan’s.

In 1971, Father Arthur Kammer was named pastor of the parish. When he arrived at St. Stan’s plan were already underway for the celebration of the parish’s centennial in 1972. Fr. Kammer forged ahead with these plans and the anniversary celebration successfully marked this milestone in the life of the parish. Father Kammer came to St. Stan’s with a background in hospital chaplaincy, and he carried on an extensive ministry to the sick in Maspeth and beyond during his years as pastor. He was instrumental in the founding of the Maspeth Lions’ Club, which continues its work of philanthropy and community involvement with an active membership to this day. In 1984, Fr. Kammer renovated the sanctuary of the church. Due to a serious heart condition, Fr. Kammer retired as a pastor in December 1987. He remained at St. Stanislaus until 1992, when he moved to the retired priests’ residence at Douglaston. Fr. Kammer died on February 1, 1996.

Father Robert Blauvelt came to St. Stan’s in 1986 as parochial vicar. When Father Kammer became ill, Fr. Blauvelt was appointed administrator of the parish, and with Fr. Kammer’s retirement, was named pastor in January, 1987. Fr. Blauvelt initiated a wide range of outreach and pastoral programs to meet the needs of a diverse community. Ministry to the bereaved, to the homebound, to singles and to divorced and separated Catholics are but a few of the pastoral programs Fr. Blauvelt began. The spiritual life of the community was fostered by prayer groups, the children’s’ Liturgy of the Word and by the Isaiah parish renewals. In 1994 Fr. Blauvelt decided not to seek renewal of his term as pastor, and continued to minister as parochial vicar until his retirement.

In June 1994, Father Michael Walsh was installed as pastor of St. Stan’s. Fr. Walsh’s appointment as pastor was followed by the appointment of new pastors at Holy Cross and Transfiguration, our neighboring Maspeth parishes. Together the parishes launched a new era of pastoral cooperation in providing for the needs of the Catholic community of Maspeth. Cooperative efforts in youth ministry, catechist formation, the RCIA program and ecumenical outreach were established. Within the parish, Father Walsh undertook an on-going program of repairs and improvements to the parish buildings. Through the generosity of the parishioners to the Alive in Hope Campaign, the parish church was repaired, renovated and modernized. In 2006 Fr. Walsh was reassigned Our Lady of Perpetual Help, Ozone Park where he ministered as pastor until his death in 2008.

With the reassignment of Fr. Walsh, Fr. Paul A. Wood was installed as Pastor, adding to his assignments as Chaplain at Queens College and Pastor at Transfiguration. With this third assignment, Fr. Paul was given the mandate by Bishop DiMarzio to begin the “reconfiguration” of the two Churches, combining ministry and resources where possible into one, but remaining two viable, vibrant Catholic parishes.

Through the years, one outstanding attribute of St. Stan’s has been the accessibility of all its pastors and associate priest to the parishioners. In times of sadness and joy, or just to talk things over, in involvement with children’s sports and scouts, or even taking part in lunch-time jump rope, in crises of faith, or the happiness of blessing a new home, the priests of St. Stan’s have been active participants in the lives of the people of the parish.

St. Stanislaus has always been seriously committed to involving its people in the life of the parish, and, now with reconfiguration with Transfiguration, even more so. With the numerous organized groups covering a wide variety of ministries, interest and social and spiritual needs of the two parishes, there is truly something for everyone, from the social-based Golden Age to the outstanding youth programs of CYO Sport and Youth Ministry.

Through all the years and the changes they have brought about, St. Stan’s has never lost sight of its main purpose: to minister to the members of the parish family. From its elderly who preserve ties with our history, to the middle generations who continue to develop the community for the next generation, to the young people who are its future, St. Stan’s continues to grow and embrace people with backgrounds other than those of the original European settlers, celebrating its inclusive community of faith.

Your support of our Parish is needed year round.
Please continue to support our parish by continuing  your gift of Sunday offertory by either dropping your envelope through our Rectory mail slot, mailing your envelope to the Rectory (no cash please), or utilizing our online giving program:  Parish Giving.

If you want your child to Learn, Serve, Lead and Succeed, then consider St. Stanislaus Kostka Catholic Academy of Queens. Registration for 2020-2021 is now open.  Visit us and see all that is available for your child: State- Of- The- Art STREAM Lab, Musical Theater Program, 1:1 Student Device Ratio and much more!    Scholarship opportunities are also available.

We welcome all parishioners, with or without school age children, to make an appointment to visit and come and see what’s new, wonderful and so special about our Academy and tell a friend! For a tour call the Academy at 718-326-1585.  Follow the Academy on Facebook @ststansmaspeth.  Visit our website:  www.ststanscaqn.org 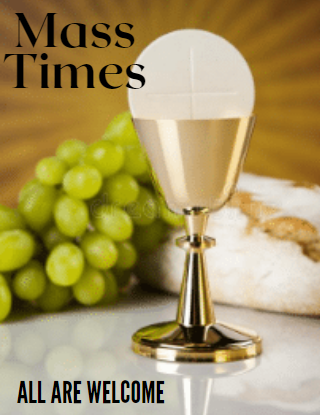 Holy Days of Obligation
To be announced. See Mass schedule in bulletin

Reconciliation
Saturday:
3:15pm – 3:45pm at Transfiguration
or call either rectory for an appointment

Both churches and Transfiguration Parish Hall are wheelchair accessible